Zymeth is a Zen Master of the Lotus Clan, and is also the clan's acting leader.

Lord Zymeth is the evil and remorseless leader of the magically driven Lotus clan. Politically, Zymeth is cunning and extremely treacherous; he forced his way into power by disposing of his political opponents, including the high priestess Sethess, who would have otherwise been the most legitimate candidate for the leadership of the Lotus Clan at the time. In fact, Zymeth was almost single-handedly responsible for the great war that erupted between the Wolf, Serpent, and Lotus Clans.

Because Zymeth worked his way into favor with the Serpent Clan's Lord Oja, he found himself in a position to bend the Serpents' will to his own, and he was able to wipe out nearly the entire clan after tricking them into constructing ships that would have supposedly taken them away from the isle they inhabit. These ships were cursed to drain the life from their passengers, and upon discovering Zymeth's treachery, Oja plunged the two clans into war.

The Wolf Clan took this opportunity to rebel from their enslavement and struck up a war of their own. Zymeth's political power is equally matched by his magical prowess on the battlefield. Zymeth is more powerful than any Lotus master warlock, and while he has the ability to cast all sorts of magic, he seems to favor dabbling with the weather more than casting other types of spells. Zymeth doesn't carry any weapons, but he's able to summon storm clouds in an instant. His special attack causes it to rain in the surrounding environment, letting rice grow back at a faster rate and triggering his innate ability, which sends arcs of lightning toward nearby enemies during a downpour.

For generations, Lord Zymeth has ruled the Lotus Clan as the undisputed first among equals. He is a master manipulator and orator, using deception and threats to build coalitions and cow opponents. In his dealings with other clans, Zymeth also uses his great longevity to powerful effect, planning schemes that span generations of Wolf and Serpent clansmen.

No one could rule the Lotus without being a wizard as well as a statesman, and Zymeth is no exception. Like most of the warlock elite he is a specialist, and his sphere is weather, the sizzling crackle of lightning or the relentless force of a summer storm.

Zymeth fears nothing as he's evil himself, walking on the battlefield and calling lightning upon his enemies. He intimidates them, meanwhile inspiring the Lotus clan's units. Anyone who dares to attack Zymeth with a melee weapon, shall receive devastating magic blasts of incredible force. Still, he prefers to shoot from afar. Zymeth usually stands still, regenerating his stamina to strike enemies with lightnings from above, those are very powerful and cover a wide area, which is why any enemy would prefer to stay away from Zymeth.

Paired with his lover, Yvaine, Zymeth is able to perform a deadly combo: while enemies are trapped inside Yvaine's "Ice Prison", they will continuously get struck by Zymeth's lightnings.

Zymeth uses the Serpent Orb stolen by the “ninja” to free the Lotus of corruption. While using the Orb, he will become fearless, rampaging across the Dragon’s skin. Zymeth has increased health, damage and even increased resistance of his major weaknesses. This form is appeared in last mission in Kenji's Journey - Dragon Road. He has 1500 HP in this form.

This form is non-playable.

Zymeth has been the leader of the Lotus Clan for nearly four generations--or about as long as anyone has known about the clan's existence. Nobody knows how old Zymeth is, and how he has managed to survive--both physically and politically--for so long is also a mystery. It is suspected, however, that his ties to the occult probably play a role in his survival.

Politically, Zymeth is very cunning and extremely treacherous. He forced his way into power by disposing of his political opponents, including the high priestess Sethess, who would have otherwise been the most legitimate candidate for the leadership of the Lotus Clan at the time. In fact, Zymeth was almost single-handedly responsible for the great war that erupted between the Wolf, Serpent, and Lotus Clans. Because Zymeth worked his way into favor with the Serpent Clan's Lord Oja, he found himself in a position to bend the Serpents' will to his own, and he was able to wipe out nearly the entire clan after tricking them into constructing ships that would have supposedly taken them away from the isle they inhabit. These ships were cursed to drain the life from their passengers, and upon discovering Zymeth's treachery, Oja plunged the two clans into war. The Wolf Clan took this opportunity to rebel from their enslavement and struck up a war of their own.

My Most Honored Lord Oja, here is the report which you requested of me. I apologize for its sketch and fragmentary nature -- nonetheless, I believe it to be the most complete answer we have to your most basic question:

As ambassador to the Lotus Clan, one of the few outsiders permitted to live upon the High Plateau, I made it a priority to answer this question. For obvious reasons, as he has led the Lotus Clan for as long as we have known of it's existence -- three of our generations.

This task proved more difficult than it sounds. What I know has taken work and risk. Some of it comes from my very limited access to their written archives, old goatskin and papyrus scrolls stacked in a dry room of their stronghold. The rest comes of hours spent in the chilling company of master warlocks, some of them Zymeth's political opponents.

The Lotus Clan is much more complex than it appears to the outsider. To other clans, they seem to speak with one voice -- Zymeth's. And to an extent, they are united. They all believe in the strange sorcery or religion they practice, which is called the Forbidden Path or the Dark Revelation or any of a hundred other names. Even the peasantry is fanatical.

But beyond this, their clan is a maze of titles and hierarchies and colleges and councils. The most powerful magicians, people like Koril, or that unnatural child Issyl, also tend to hold political power. But they also tend to be strangest, most eccentric individuals, consumed by arcane researches, driving obsessions, and petty squabbles. Despite this, however, they also seem to by masters of intrigue, conducting political manipulations that reach across decades, even centuries.

One might think this would make Zymeth more vulnerable, subject to internal unrest. On further reflection, the fact that he has remained in power for so long just makes him more intimidating. Here is what I have pieced together about his history. We don't know who old he is. We don't know how he's survived this long, although the reason must be connected to his occult abilities.

We know he goes as far back as the old precursor clan that the Lotus were once a part of. He was one of the original group that broke with traditions to practice their forbidden art, and then escaped as the rest of their clan were destroyed. We know he survived the Horde, and the crossing. How many others did as well, I do not know.

How powerful is Lord Zymeth? Politically, I think no one wants to oppose him directly. They may be maneuvering, looking for ways to rally followers, gaining support gradually over time. But these are people who think in years and decades, and none of them fully trust one another. Anything that happens will be subtle.

As a warrior? This is even harder to estimate. We say the Lotus Clan fight during the war with the Wolf Clan. We saw the men they called warlocks and master warlocks fight in ways we don't understand, destroying enemies with black lightning. Zymeth is one of the few in the Lotus Clan that have gone beyond these categories. We don't know how many there are, although we saw at least six in the final battles before Blackbone fell. Strange men, they are, and none alike. All seem to have some specialty or other -- Soban's golems, or the way Issyl corrputs time.

Lord Zymeth's affinity is weather. I don't know why -- maybe it puts him closer to the old nature-religion of his original clan. But I've seem him call lightning or gather black clouds around his stronghold. Weather on the Plateau always perturbs slightly according to his moods, bright or stormy.

This is almost all I have learned, but I will tell you one last story. Zymeth used to have a major political rival, a warlock called Imbris, very powerful and very old. I gather he was more cautious and reclusive than Zymeth. He envisioned the Lotus Clan settlement as more of a scholar's community. He had a lot of followers within the clan, I do know that. His specialty was in earth-magic -- earthquakes and rock-shaping and so forth. It came down to a duel between him and Zymeth -- this was a secret at the time, some time during Lord Yukio's reign. You can even see evidence of it, in our records -- storms around the High Plateau, and earth tremors. A sizable chunk of the Dragonsteps fell around that time, too.

I asked the man telling me this, "So, Imbris is dead, then?" He just gave me an odd look. The thing is, Lord Oja, Imbris lost, it's in the records. But I don't think he'd dead, exactly. I think he wishes he were. 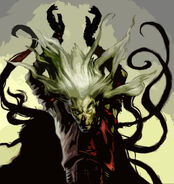 Zymeth Concept Art
Add a photo to this gallery

Quotes (When engaging in melee combat)

Retrieved from "https://battlerealms.fandom.com/wiki/Zymeth?oldid=15885"
Community content is available under CC-BY-SA unless otherwise noted.