Yvaine is a Zen Master for the Lotus Clan, available in the Winter of the Wolf expansion pack for Battle Realms, and also serves as the expansion's main antagonist.

The ice queen's heart is as cold as the crystalline magic she weaves. Dressed in a long, black dress with spider-like arms protruding from the back. Not much is know about Yvaine and where she came from or how she got her alignment with the Lotus Clan.This cold-hearted hissing old hag oversees the day-to-day operations of the shale mines, and she resents that fact every waking hour. She longs to be more than just a babysitter for the Wolf Clan slaves, and she takes out her resentment and hatred on her subjects.

Highly skilled in the arcane arts particularly in ice magic, Yvaine attacks with waves of frost that penetrate her enemies deep into the bone, gripping them in a cold embrace. From a distance, she'll conjure and hurl shards slender lances of ice that travel through the air and shatter into sharp fragments that stabs its victims. Yvaine is a desperate, merciless, and a very crafty sorceress who would stop at nothing until all of her enemies tasted the cold embrace of death it self.

Yvaine used this form during the last mission in Grayback's Journey. Yvaine uses the White Wolf Totem, the sacred treasure of the wolf, to make her invulnerable to everything. Actually, her HP stat in this form is described as 600. 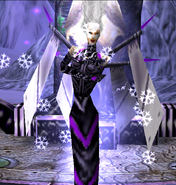 Yvaine wielding the power of White Wolf, talking to Grayback
Add a photo to this gallery

Retrieved from "https://battlerealms.fandom.com/wiki/Yvaine?oldid=15802"
Community content is available under CC-BY-SA unless otherwise noted.