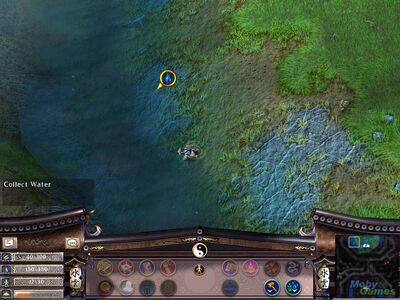 Water is one of the two resources needed to gather (the other being Rice) in Battle Realms to make buildings and train units. Water is unpassable if it is deep but units can go through if it isn't. A water source can be nearby or sometimes far away but peasants can make Wells if they have the requirements they need. Not only used the water for the economy, but can able to extinguish fires in the building and water rice that make them faster to grow.

Water is used to make buildings and train units but also have other uses. Water is used to water Rice Fields to make the it grow faster. Water is also used to put out fires on buildings to make sure they are not destroyed by the flames. A Well can be built by peasants if they have the requirements they need.

Another way of getting water is to construct Wells. Wolf Clan has the easiest to get water, just because the prerequisite of Well is Peasant Hut. It can acquire water by just demolish the under constructed building. It can return half of the cost of the demolished building.

Arah on the water

A group of units pass the water to destroy a building using fire.
Retrieved from "https://battlerealms.fandom.com/wiki/Water?oldid=16049"
Community content is available under CC-BY-SA unless otherwise noted.