Start a Wiki
The Watchtower is a common structure that all clans make use of, even though they differ greatly in appearance.

Watchtowers offer several tactical advantages: further sight, greater missile range, and superior defense for warriors perched atop their platforms. In addition, each Clan's watchtowers hold unique surprises for any invading enemies. These little tricks are considered Clan secrets. Also, when destroyed, the unit that was on it takes damage, which differs depending on the what unit. NOTE: Lotus watchtowers are magical, and teleport the unit down instead of them falling.

Each clan's Watchtower has a unique ability, powered by an energy-bar not too dissimilar from a unit's stamina. These abilities can only be used when there are enemy units close to the watchtower. 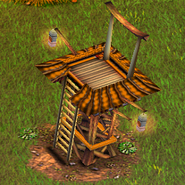 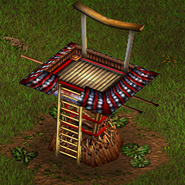 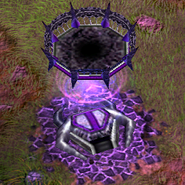 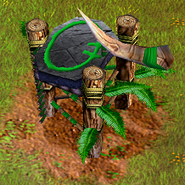 Wolf Watchtower
Add a photo to this gallery

Wolf Watchtower Concept Art
Add a photo to this gallery
Retrieved from "https://battlerealms.fandom.com/wiki/Watchtower?oldid=11333"
Community content is available under CC-BY-SA unless otherwise noted.