Start a Wiki
The Thieves' Guild is a building of the Serpent Clan.

There is no organization in the land with more influence, or a more loyal membership, than the Guild of Thieves. Originally, the Guild operated wholly underground, and many intelligent leaders disputed rumours of its vast reach; the less intelligent often believed it a myth.

The perceptive Lord Shinja was the first to make contact with its upper echelons, wisely offering the Guild legal protection and legitimacy in return for military training. This is an ideal arrangement; the Guild's influence has spread throughout the army, and its soldiers have picked up some of the dirtiest tricks and deadliest secrets imaginable.

In Battle Realms the Thieves' Guild is one of the Serpent Clan's two sources of individudal units' Battlegear, with the other being the Metal Shop. 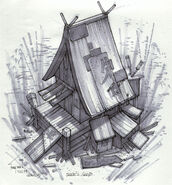 Thieves' Guild Concept Art
Add a photo to this gallery
Retrieved from "https://battlerealms.fandom.com/wiki/Thieves%27_Guild?oldid=8866"
Community content is available under CC-BY-SA unless otherwise noted.