Shinja is a Zen Master of the Serpent Clan, and serves as the its leader unless Kenji chooses to take control of the clan.

The leader of the Serpent Clan is by all accounts a coldhearted but efficient warrior. He was the captain of Lord Oja's Serpent Guard at the time of Oja's murder, presumably at the hands of his son, Kenji. While the proof was circumstantial, Kenji instantly fled the Serpent Clan and remained exiled for seven years. It was Shinja and his men who sent search parties into the woods in hopes of capturing Kenji. In the years following Oja's death, Shinja rose to take over control of the Serpent Clan.

But Shinja wasn't known for being cruel; he was merely indifferent. One account of this indifference to life came from one of his ex-bodyguards who, at the time, was part of a group that was sent after a ragtag band of bandits, who became the inadvertent kidnappers of a Serpent daimyo's daughter when one of their heists went wrong. While his group was outnumbered three to one in unfamiliar territory, Shinja never showed any hesitation when confronting the kidnappers, and at the same time, he didn't bask in the confidence of his men's skill. He knew that the bandits were nothing more than a bunch of farmers with no formal weapons training whatsoever, and yet, he also knew that an example had to be made out of them. Without even batting an eye, Shinja issued his men a single command, and within minutes, the entire group of bandits had been cut to ribbons. Shinja himself participated in the slaughter (lest his men lose confidence in his leadership) and showed no pleasure in his action. Nor did he seem to feel any guilt.

Were it not for the fierce personal loyalty his rival Otomo inspires, Shinja surely would rule the entire land with his brand of pragmatic justice and ruthless efficiency. No one loves Lord Shinja, but none can deny that he keeps order and has helped preserve the Serpent Clan in difficult times.

In person Shinja is an undeniable force, charismatic, coldly intelligent and utterly without fear. No one has ever crossed him and lived to tell of it, beyond a babbled confession in a chamber deep beneath Serpentholm. He despises talk of the old Dragon clan, and considers honor to be a sadly obsolete concept. In all things he is a realist, and magical attacks have been known to quail and dissipate under his skeptical gaze and indomitable will.

Shinja rules the Serpent clan under an iron grip as he lead a bandit army to suppress the peasant rebellion under Otomo's command. With Kenji's return, Kenji will try to sought Shinja's loyalties with Otomo's aid. Shinja's fate is decided as to whether Kenji will either recreate the Dragon Clan or restore the Serpent Clan.

Path of the Dragon

Shinja controls two provinces in the lowlands at the time of Lord Oja's death as he resisted Kenji and Otomo but eventually defeated him and reluctantly submit his loyalty to Kenji. Kenji then questioned Shinja on the location of the Orb as he was supposed to protect it in which he replied it was in the Swan's Pool. Shinja then guided Kenji on its path to the Swan's Pool. While on the journey, he would later questioned Kenji on its search for the Orb. Upon reaching Serpentholm, they found out the Orb was stolen by a mysterious Ninja. Shinja become frustrated as he lost his faith to Kenji while the latter would focused on the Orb as well meeting with the Dragon and has no plans to reestablish the Serpent clan which he will restore it by himself. Otomo accompanies Shinja in wiping out either the Wolf or Lotus Clans, afterwards Shinja betrays Otomo and had him executed by crucifixion as well taking control of Serpentholm. He would later ally with the Lotus and sent them to delay Kenji as he returns from the Dragon's Spire in which he discovers Otomo's body crucified in which he gives Otomo a proper burial. Kenji immediately wipes out the Lotus vanguard then proceeds to Serpentholm where he defeats Shinja and his forces as well his Lotus allies and kills him, avenging Otomo's death.

Path of the Serpent

Shinja maintains both provinces in the lowlands as Kenji attempts to sought his loyalty with Otomo's assistance. Upon defeating him, he loyally pleads his allegiance to him just as he faithfully served Lord Oja then questioned on the whereabouts of the Orb. Shinja later assisted Kenji in wiping out their enemies which made Otomo completely dismayed stating Kenji's actions as madness. While on Swan's pool, Shinja was instructed by Kenji to kill the Geisha due to the latter's obsession with the Orb. After taking control of Serpentholm and with the Orb stolen by the Ninja as well defeating the opposing clans, Shinja was sent by Kenji to the Dragon's Spire to pacify the villages as well to restore occupation in these areas. Upon reaching to the Dragon's Spire, he discovered that the villages were ruined and deserted as well littered with decaying corpses in which he and his forces battled living zombies and Spirit warriors as he tries to seek some answers behind this pestilence. Upon reaching the mountain top, he found out that the Necromancer is behind of infestation (making the master swordsman completely shocked) as the Necromancer offers his services to the Serpent Clan due to the Wolf's possession of the Orb (through his telepathy with the dead). Accompanied with his forces and the Necromancer as they departed from the Dragon's Spire, Shinja later discovers a rebel forces sent by Otomo to eliminate him. Shinja quickly dispatches the rebel army with the Necromancer's aid.

Upon reaching to Serpentholm, he led his forces and the Necromancer in assisting Kenji in wiping out Otomo's forces and their Wolf allies but not long before Kenji kills Otomo, placing the latter's head hanging on the gates of Serpentholm. In the aftermath, Kenji and Shinja decides on acquiring the monk's or the ninja's aid. Upon hiring the Ninjas or the Monks, Kenji and Shinja witnessed the peace efforts conducted by Grayback and his Wolf entourage by sending an emissary to represent as the flag of truce but Kenji coldly responds by killing the Wolf emissary due to the Wolf Clan's cooperation with the ninja who killed his father.

Shinja later participated in its final struggle against the Wolf Clan as well the Dark one which revealed its true form in which it sets the Horde on the loose as it attacks Kenji and his forces. After the Nightvol's demise, he quickly poised himself along with Kenji and the Necromancer as they prepared for a battle with the number of Hordelings swarming upon them. 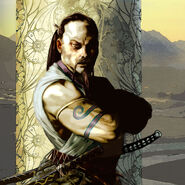 Retrieved from "https://battlerealms.fandom.com/wiki/Shinja?oldid=16020"
Community content is available under CC-BY-SA unless otherwise noted.