The Powder Keg Cannoneer is a unit of the Dragon Clan.

Dragon tacticians disdain firearms as crude and inflexible: Foolish weapons borne only by fools. On the other hand, they have long recognized the usefulness of artillery on the battlefield. The result of this duality is the Powder Keg Cannoneer. These elite fighters spend half of their time training with their unique weapon, a small cannon that launches kegs packed with gunpowder. The other half is spent eating, for - considerations of strength aside - it takes a man of immense proportions to withstand the recoil of such a cannon. The very best Cannoneers are former sumo champions; one may still see them salting the ground to ward off evil spirits and ensure their safety, just as they once did in the wrestling ring.

The sight of a crew of tremendously fat men lumbering towards the battlefield, has, on occasion, incited jeers and laughter from foolish opponents. The laughter stops when cannon charges begin tearing apart buildings as easily as men.

Powder Keg Cannoneers are siege units that have a slow movement speed and firing rate, but their distinctive Explosive Keg projectile effectively damages buildings and are especially lethal to foes vulnerable to Explosive. Their attacks also punishes tightly packed units. Pressurized Kegs and Calisthenics techniques increase these bombardiers' firepower and health, respectively. Indirect Fire enables the Powder Keg Cannoneers to shoot from a much farther distance and safer position whilst slightly boosting his attack damage from 35 to 40, but it drains a considerable amount of stamina; it would last for 25 seconds assuming he has 100% stamina to begin with. The Shrapnel Keg is a relatively expensive, single-use battle gear that hurts tightly packed enemy units, dealing 75 piercing damage.

On the flip side, Powder Keg Cannoneer's slow speed, short attack range (for a siege unit) and vulnerability to cutting weapons make them easy victims to fast melee units, making them unable to effectively run away from a fight. while their ironic weakness to Explosive and slow fire rate renders them an unsuitable match against enemies with explosive arsenals. With all that said, Powder Keg Cannoneers fight best when perched on Watchtowers or heavily protected by fellow Dragon clansmen.

Due to coding error, the Pressurized Kegs technique adds 1.1 piercing damage to the Powder Keg Cannoneer's melee and missile weapons.

Another possibility is that Pressurized Kegs technique was suppose to add 11 piercing damage, which would be in-line with other 2-yang damage-buffing techniques.

Pressurized Keg's bonus damage is piercing in nature and, being non-poisonous, subject to enemy's piercing resistance. For example: 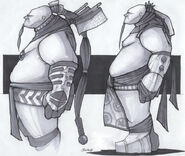 Quotes (When engaging in melee combat)

Retrieved from "https://battlerealms.fandom.com/wiki/Powder_Keg_Cannoneer?oldid=16053"
Community content is available under CC-BY-SA unless otherwise noted.