The Peasant Hut is the most important building for any clan. It automatically generates Peasants and functions as a drop-off point for Rice and Water.

The Peasant Hut is the most basic of all buildings, offering little more than a roof to keep both rice and peasants dry. Dragon, Serpent, Lotus and Wolf Clans build their dwellings in vastly different shapes and forms, but all share similar characteristics: simplicity, practicality and the desire to keep occupants warm and safe at the least possible expense.

The Peasant Hut is the first building that can be built, and is the only source of Peasants, making it a necessity, as well as a priority to protect. Peasant Huts produces new Peasants automatically at a rate that varies with population size. They are quickly employed when there are only a few units, but the bigger the population, the slower new peasants arrive. 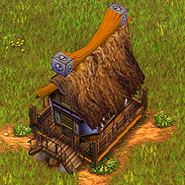 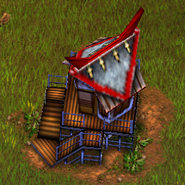 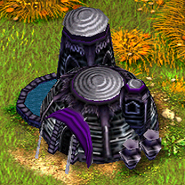 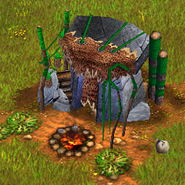 Wolf Peasant Hut
Add a photo to this gallery

Retrieved from "https://battlerealms.fandom.com/wiki/Peasant_Hut?oldid=15872"
Community content is available under CC-BY-SA unless otherwise noted.