The peasants of the Wolf Clan are hardy and cheerful, viewing their work in the fields as less a chore than a lifestyle they quite enjoy. They spend all day working the land they love, building their strength, and keeping their families fed; what's to complain about? 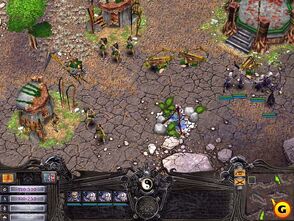 Alpha screenshot, showing the different game design and baskets on the peasants' backs.| 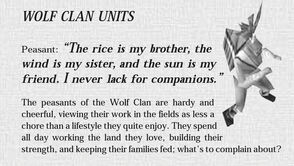 From the original manual.|
Add a photo to this gallery
Retrieved from "https://battlerealms.fandom.com/wiki/Peasant/Wolf?oldid=15346"
Community content is available under CC-BY-SA unless otherwise noted.