Start a Wiki
The Necromancer's Throne is a building affiliated with the Serpent Clan.

The path of the serpent is usually marked by pragmatism and moral flexibility; victory on the battlefield is proof enough that one's methods were justified. However, cold ruthlessness is also part of this mindset, and this finds its fullest expression in the construction of the Necromancer's Throne.

When summoned with the blood of four Ronin, the Necromancer may consent to grant his aid to the Serpent, and is bound by the sacrifice of the Ronin to refrain from harming their allies. Otherwise, he revels in cruelty and murder, and takes particular glee in raising the bodies of the dead to slaughter their former comrades. Most agree that accepting such aid is foolhardy, but Serpent leaders shrink from little on the field of war, especially when defeat is imminent.

Unlike other Zen Masters of the Serpent Clan, the Necromancer cannot be summoned from the Keep; he can only be summoned through the sacrificial offering of four Ronin, and should the Necrmancer perish, he may be resummoned through another sacrifice. 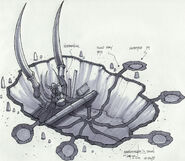 Necromancer's Throne Concept Art
Add a photo to this gallery
Retrieved from "https://battlerealms.fandom.com/wiki/Necromancer%27s_Throne?oldid=9558"
Community content is available under CC-BY-SA unless otherwise noted.