Gaihla is a Zen Master of the Wolf Clan.

Not much is known about Gaihla. She dwells in the deepest, oldest woodlands, and according to the tales she is a solitary druidess or forest goddess, or something in-between. Hundreds of years old, she has been known to disappear for decades and live out the time as a giant oak tree. All forests and growing things are under her protection. Stories about Gaihla have been surfacing among Serpent Clan members since the day the Wolf Clan arrived on the island of Battle Realms. Reports make her out to be a druidess and state that wherever she appears, strange occurrences always follow. For instance, one such report claims that a farmer saw a slender woman, believed to be Gaihla, standing in his rice paddy. Later that spring, the farmer had the most bountiful crop ever. Other reports from hunters claim that a woman somehow made the forest around them move, causing them to lose their prey.

Not all reports of Gaihla's appearances are as harmless, however. Some Serpent settlers claim to have been warned by the same mysterious woman not to tear down the forest for the purpose of building homes. Often when these warnings went unheeded, some settlers' bodies would be found gouged in a hundred places, or worse, entire villages would simply disappear as if they never existed.

The Serpent Clan regularly sent raiding parties out into the woods to try to hunt down Gaihla; most never returned from their expeditions. During one such raid, however, Gaihla was pursued deep into the forest, where she was confronted by one of the Serpent Clan's warlocks. While even the warlock wasn't a match for Gaihla, she lost control of her own powers during the confrontation, and witnesses claimed that Gaihla transformed into a massive tree. Whether that tall tale is true or not, reports of Gaihla sightings have all but ceased since that day...

Despite her allegiance to life, she can be a vicious fighter, wielding a wreath of thorns in battle  against those who would threaten the forests. Her relationship with plant life is mysterious - she moves unimpeded through the densest undergrowth, and any crops thrive in her very presence.

Gaihla can be recruited in the original Battle Reams campaign, provided the player has chosen to side with the Dragon Clan. In the relevant mission, a group of Wolf Pitch Slingers will be burning forests to help with their mining projects; as they burn the trees however, they are also causing Gaihla great pain. After Otomo and Shinja has dealt with the Pitch Slingers, Gaihla curses the miners and joins forces with the Dragon Clan, promising that the miners will "pay for their recklessness". As long as Gaihla is kept alive throughout the mission she will be available for future missions by summoning her from the Keep.

Gaihla also appears in Grayback's Journey as a major character in assisting on his journey. In one mission, she rests up in Tao's monastery temporarily. After the mission is finished, she was recovered and continue along with Grayback and the Wolves.

As Gaihla strongly resists Piercing, Blunt and Magic damage types, she can sustain hard hits from the enemy watchtowers, while the demolition units will be taking those down.

It's important to note that Gaihla is unique (because of the instant area- of- effect healing) and the only healer in the Wolf Clan, meaning the top prioritiy should be usage of her Battle Gear. That being said, Gaihla is best left idle, always recovering stamina and healing allies.

Gaihla is still a weak fighter, so it's wise to keep her away from the enemies, but she can still assist her allies by running in the middle of a fight and using her battle gear, to then run back to a safe place (like forests that don't reduce her eyesight due to one of her innate abilities).

Gaihla can be put near the rice fields to make rice grow much faster (one of the innate abilities). After she throws the flowers around, the rice grows back at a very fast rate, quicker than if you would water it. 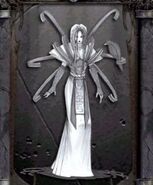 Retrieved from "https://battlerealms.fandom.com/wiki/Gaihla?oldid=15807"
Community content is available under CC-BY-SA unless otherwise noted.