Battle Realms is a real-time strategy game released by Ubisoft and Crave Entertainment in 2001, developed by Liquid Entertainment.

With a strong Japanese theme, the game's "Clans" are composed of the Serpent, Lotus, and Wolf clans, with rumors of an ancient Dragon clan.

There are two distinct storylines that take place in over 36 scenarios. Each sides core campaign has 14 scenarios, but gameplay choices will affect the path of the game.

During your campaign you can have up to six different Zen Masters to help you. Provided you keep them alive, they will carry over from mission to mission. Once the Keep becomes available to you, you will no longer have to worry about keeping them alive.

The campaign starts off as Kenji returns home and must decide whether to revive the great legacy of the noble Dragon Clan, or to simply follow in the footsteps as his corrupt predecessors by leading the insidious Serpent Clan. Regardless, Kenji will find himself up in arms against the Wolf Clan, the Lotus Clan, and perhaps even the horde his ancestors thought they escaped.

You can learn more about the History of Battle Realms' here.

The entire story of Battle Realms takes place in a fictional universe rather than real earth, taking to an unknown continent, which is quite often referred to by many players as "Battle Realms Island". There are quite a few locations that can be accessed through the campaign of "Kenji's Journey", or by playing "Battle Realms: Winter of The Wolf" and playing through "Grayback's Journey".

Long ago, back when Battle Realms was still in development, a special edition of the game was available to the interested customers. Such sites as IGN used to promote it.

According to IGN, this edition came with extras such as:

At some point, there was also a number of custom-made medals shipped along with the collector's edition.

The medal shows the early Battle Realms logo which is meant to represent Yin & Yang symbol in its own unique style. It was around during the release of the game and could be seen all over the official sites and forums (the CD back cover also has it).

Medals - I don’t remember much, if at all about the medals.  They were  made as a marketing promotion and I think it was either a press  exclusive or you got it if you preordered the game through the Ubisoft  site.  It was so exclusive that no one at Liquid, not even me, got one.  :(.

The logo on the medal was the official logo for BR, as I recall, the  spikey Ying yang shield that was used later happened because the  artists couldn’t give me the original logo to my quality standards and  so had to create something new that they could execute.

On January 20, 2020, user GriffinPrime posted a clear picture of their medal on BR reddit, inquiring about its origins. 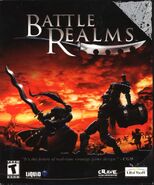 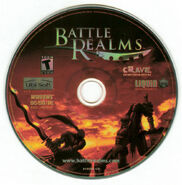 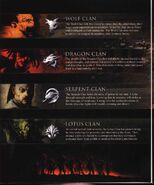 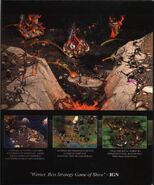 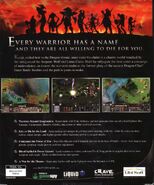 Part of the early logo
Add a photo to this gallery