Arah is a Zen Master of the Dragon Clan.

While she might appear somewhat frail, Arah is stronger than most men. During a run-in with a Wolf Clan patrol, Arah was seen doing battle with two massive black bears. She injured one of the bears enough to cause it to retreat, but, to the Wolf Clan's surprise, she felled the second bear with a precision arrow shot through its eye. Upon moving in to question Arah, who at the time was trespassing on Wolf Clan territory, the Wolf Clan patrol instantly learned to respect and fear her almost superhuman archery skills. From atop a tree, she managed to fire an arrow through the armor plates of one of the Wolf members. A similar shot a few seconds later proved that the first wasn't based on luck. In the end, it took the better part of a day for the Wolf patrol to flush Arah from the tree and subdue her.

Arah is an archer without peer, and her skills overshadow even the Dragon Clan archers of old - her arrows move with a speed, accuracy, and force that terrify her foes. She carries a massive longbow that requires more than 120 pounds of draw strength to use. Flying from the oversized longbow, her arrows punch through armor and bone like stabbing spears.

She traveled to this land from elsewhere, having met Kenji during his long exile. Somewhere in their shared past is a bond that links them, a blood debt or point of honor that led her to follow him home. A tall, slender woman, her manner is distant and cold, but for now she fights for the Dragon with all her heart and soul. 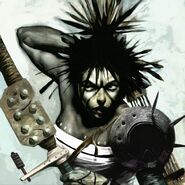 Arah Concept Art
Add a photo to this gallery

Retrieved from "https://battlerealms.fandom.com/wiki/Arah?oldid=15791"
Community content is available under CC-BY-SA unless otherwise noted.